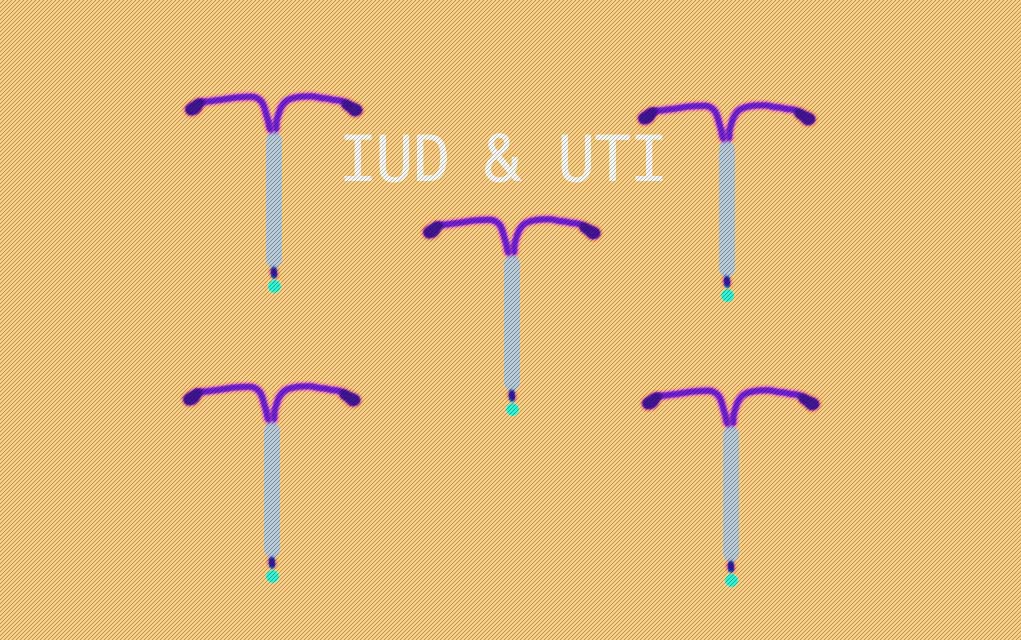 In a previous post, I explained why certain condoms can cause a UTI; this time let’s examine the connection between IUD & UTI.

IUDs were pretty popular in the USA starting 1960 through early 2000, however nowadays most of IUD users live in China, and only 6% of women using contraception choose IUD as their contraceptive method in the USA.  Perhaps, general unpopularity of this contraception method is the main reason why your gynecologist never heard about IUD & UTI link.

Dysfunction of the trigone may lead to vesicoureteral reflux when urine flows backward from the bladder into the kidneys, which is a risk factor for recurrent UTIs.

A study that was researching Asymptomatic Bacteriuria in Users of Intrauterine Devices established that “trigone congestion was observed in 24.6% of IUD users: 56% of whom had used an IUD between 1 and 3 months, 35% of whom had used it for more than 2 years, and no users between these time parameters.”

Congestion is the dilation of vessels that supply blood to bladder trigone, caused by an excess concentration of blood. Researchers concluded that to avoid urinary bladder effects and inflammatory pelvic disease, IUDs should not be used more than 2 to 3 years continuously.

As you can imagine, if IUD could potentially affect your ability to properly eliminate urine, this might lead to an increased number of bacteria growing in your bladder.

In many cases, this does not immediately result in UTI symptoms and therefore called “asymptomatic bacteriuria”. This means, that bacteria are present at abnormally high concentrations but the host doesn’t experience any physical symptoms.

In the same study (Asymptomatic Bacteriuria in Users of Intrauterine Device by Masoumeh Fallahian, Esmat Mashhady, Zohreh Amiri) the researchers examined 228 women who were at the time using various methods of contraception for bacteriuria (presence of pathogenic bacteria in the urine).

Bacteriuria was present in 9.9% of women fitted with IUD, and 1.3% of women in control group (those who didn’t use any contraceptive methods) out of 113 women who participated in the study. Predominant isolated pathogenic bacteria was E. coli.

The reasons for the lack of symptoms in people with bacteriuria are not well understood. However, scientists agree that asymptomatic bacteriuria is a strong predictor of a subsequent symptomatic UTI.

The study concluded that the use of an IUD is a risk factor for urinary tract infection and should be considered carefully, especially in women with a history of previous recurrent UTIs.

Read about alternative options to decrease the number of bacteria in your urine and heal your bladder lining.

Bacteria are ever present in our bodies but human microbiome, in most cases, manages to balance out pathogenic and beneficial bacteria of the host. What happens when we introduce new material into the existing ecosystem?

Here is an interesting case of a patient with an IUD infected by E.coli. A previously healthy woman contracted UTI four times in just seven months, several months after IUD insertion.

In fact, all her UTIs were caused by the same type of E.coli bacteria, producing extended-spectrum beta-lactamases (ESBLs) enzymes. These E. coli bacteria are resistant to many antibiotics and an infection could quickly progress into sepsis. Not good news!

After her IUD was removed and sent for culture, it appeared to be positive for ESBL-producing E. coli. Basically, she had dangerous E. coli bacteria growing on her IUD and re-infecting her.

It’s important to note that this woman’s IUD was installed in a hospital during a routine hysteroscopy.  And, the type of E.coli that she ended up struggling with, is commonly transmitted in hospitals. So one could argue, the fact that your IUD is installed in a clinical setting could turn it into a Trojan horse loaded with superbugs.

If you don’t know what’s the connection between vaginal health and UTI, that happens in your bladder, read this post about  How sex causes UTI.

Beyond the above-reported case of a direct connection between an infected IUD & UTI, there is plenty of evidence of bacterial contamination when it comes to IUDs.

What’s worse, is that bacteria not only grow on the surface of IUDs, they form so-called “biofilms”.

The presence of the IUD gives a solid surface for bacterial attachment and biofilm formation, you can think of biofilms as protective slime that bacteria coat themselves in. Infections due to biofilm formation are chronic and difficult to resolve because biofilms are impenetrable by antibiotics.

Biofilm formation could be truly fascinating, if not so scary. One could think about biofilms as an organized colony of bacteria, hiding behind the “walls” of slime that they release to protect themselves from the hosts’ immune system response and antibiotics.

Bacterial colonies are sophisticated structures and end up behaving more like a multicellular organism that capable to adjust to changes in it’s surrounding on a genetic level.

In one of the studies, researchers were evaluating IUD bacterial contamination after it’s removal. “Contamination was observed in all 5 displaced IUDs, in half the devices from pregnant uteri, and in about one-third of the remaining cases”. Enterococci and E. coli were the most common bacteria registered in all groups.

Another study looked at 86 samples of microorganisms collected from removed IUDs.The study also analyzed if a biofilm formation was present and what type of antibiotics the presented bacteria were susceptible to.

E. coli was isolated in 27% of the cases, followed by Candida albicans (20%), Staphylococcus epidermidis (18%) and others. ALL organisms were organized into biofilms and resistant to an array of antibiotics. Would it be a stretch to assume that IUD & UTI are connected knowing that 90% of all UTIs are caused by E. coli?

The study concluded that biofilm formation may be one of the major causes of persistent infection and antibiotic resistance in IUD users.

Yet another study that evaluated 127 IUDs concluded: “Our data show a close correlation between the change in the number and type of the microbial flora and the proportion of patients with BV, the longer the IUD was in place. This supports the recommendation for wearing the IUD for 5 years only to ensure safety. The complexity of the biofilm flora and the dominance of anaerobic bacteria on the IUDs older than 5 years was remarkable..”

#5 IUD & UTI: No Change In The Microbial Flora? Yet

“An intrauterine device as a possible cause of change in the microbial flora of the female genital system“ study concluded that IUD users (regardless of the type of IUD and the length of using it) have an increased chance developing a cervical infection caused by the bacteria Escherichia coli and Ureaplasma urealyticum.

However, two other studies arrived at an opposing conclusion. One study named “Effects of intrauterine contraception on the vaginal microbiota” followed 69 women before and after insertions of an IUD (both copper and levonorgestrel IUDs).

The researchers took vaginal swabs from women prior to IUD installation, 6 and 12 months after and confirmed that individual microbiota of the participants did not undergo any changes.

Another study focused on Vaginal microbiome changes with levonorgestrel intrauterine system placement looked at 11 women from 1 week before to 12 weeks after levonorgestrel IUD placement and came to the same conclusion: no significant changes in individual microbiota.

These are optimistic results, but it would be great if the researchers repeated the swabs two years later, for example. As noted in the above case of a woman who suffered multiple UTIs connected to an infected IUD, her problems started seven months after the insertion of IUD.

At the same time, Guerreiro et al. (1998) found a significantly higher prevalence of infection in IUD users in comparison with users of other contraceptive methods, based on the higher prevalence of BV in this population. These data are in agreement with those published by Ferraz do Lago et al. (2003), who found that the prevalence of cervicovaginal infections was 29.1 % and that BV was frequently found (19.7 %) among IUD users 6 months after insertion.

Read about how to support healthy vaginal flora with a special type of probiotics.

To make matters even more confusing, here is yet another study confirms a certain type of vaginal microbiota changes as a result of IUD use: The presence of an IUD does promote colonization of the genital tract by Actinomyces.

Actinomyces is a genus of the Actinobacteria class of bacteria. Actinobacteria are normally present in the gums and are the most common cause of infection in dental procedures and oral abscesses (Wiki). And Actinobacteria are strongly associated with BV. And another study suggests, women with bacterial vaginosis are at increased risk for urinary tract infections. Bazinga!

This study gives us a reason why the results might be inconsistent with other researchers who stated that no changes in vaginal microbiota were observed. “The isolation rates of the different bacterial species varied with the duration of the device in utero”.

This means, the longer you wear an IUD, the higher the chances that your vagina is being colonized by Actinobacteria, cause a BV, and BV as a risk factor for UTI.

The study mentioned above further concludes that since “copper is known to have an antibacterial effect on gram-positive anaerobes” even Actinomyces were not found in IUD wearers who had “worn the device less than a year, i.e., during the period of maximum copper release”.

Perhaps, this is why studies that looked at the effects of IUD in the first year assumed that there are no changes to vaginal microbiome? In support of this theory, some studies show that a very high amount of copper could actually induce homeostatic state and even kill in E.coli bacteria.

However, once copper release wears out, it might start feeding E.coli bacteria.

Wait, what?! Yes, copper can kill pathogens in high concentrations but when only traces of the material are present E.coli actually “feeds” on copper.

Fortunately, only a small percent of IUDs are made from copper, mostly for the women who do not tolerate hormones well.

Other concerns about IUDs

As you can see, there are plenty of reasons to refuse IUD as a method of contraception.

IUD can cause UTI due to:

Moreover, the insertion of an IUD breaches the protective barrier of the cervical mucus, and the IUD tail creates a transmission link into the uterus.

What are my options?

Before jumping to another contraceptive option, consider this:

As you noticed, many studies link vaginal microbiome health to decreased UTI risks. That’s why probiotics are so important! Read here how to chose the right type of probiotics.

Myself a former chronic UTI sufferer, I write about the latest UTI related research, advocating for the mindful use of antibiotics, smart preventive tactics, and focus on human microbiota.

Are You Washing Yourself Sick?